There are various active conscious groups on the internet, and it doesn’t take much to find one to which you can contribute. No matter what unique beliefs you hold, chances are you can find a group that suits your needs and helps you grow into the socially and spiritually aware activist so many people strive to be.

It’s great that there are so many groups out there with different philosophies, and the only downside is that they remain separate from each other. Their division could be caused by the fact that their beliefs and the things they strive for are so different, but I think the main cause is that they really haven’t tried to connect.

Every group is so secure in what it’s doing that it hasn’t taken the time to branch out and connect with other socially/spiritually aware groups who have different beliefs but strive for change in similar ways, and in my opinion, our next step will be to unite the various groups with respect for our differences and commonalities.

We’re all doing great on our own, but could you imagine how strong we’d be if we brought our groups together? We don’t all have to do or believe the same things to work together with the mutual goal of making the world a better place, and this next step doesn’t just apply to spiritual or ‘conscious’ groups.

The goal is to bring the world together, but the groups and organizations who consider themselves socially/spiritually aware will have to start first because we have an idea of the changes the world needs and we can mostly agree that unity is a potent solution. If we know that unity can solve our problems, it only makes sense to unite and coordinate our unique works together.

The hardest part about it will be learning to respect beliefs, cultures and lifestyles that are different from ours, and it all comes down to tolerance. Our society will make a lot of progress when people learn tolerance, and I’d love to see the day when everyone can get along. We aren’t there yet, but the socially/spiritually aware groups are the most capable of getting us there.

We can become a worldwide conscious community comprised of individual groups who believe different things yet still work together to raise awareness, call for justice and contribute to the establishment of a new way of life, and if we pull it off, we can eventually invite the rest of the world to join us. We can invite the groups and communities that currently keep their distance from us, and we can show them the same love and respect we show people in our community.

This might sound naïve, but I’m confident that it can happen if we refuse to give up. We might be uncomfortable with the idea of respecting beliefs that aren’t ours, but all we need to do is realize that our differences make us unique (and make life more interesting) and find common ground with each other. It’s tragic that people kill each other every day over these petty differences, and this makes it all the more important for us to set an example that the world can live by. 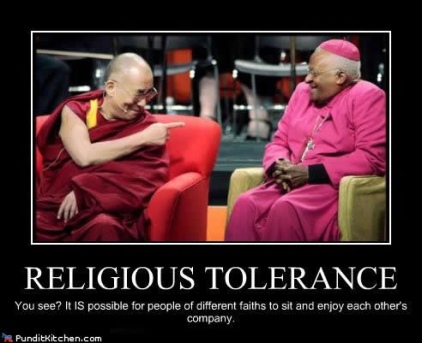 I used to be the kind of person you’d consider a ‘new ager’, but now, I don’t hold any specific spiritual belief besides the power of love to heal the world. Even if I were still a ‘new ager’, however, it wouldn’t bother me to be around with someone who thinks differently as long as we had mutual respect. It doesn’t bother me to hear people say they think some aspects of new age spirituality are hoaxes or unintendedly keep people from true spirituality, as long as they can respect me as I respect them and not automatically associate me with the downsides with which they associate the new age movement.

I could say the same for someone who disagrees that love can heal the world.

Our beliefs don’t matter as much as what they inspire us to do, and I accept anyone who genuinely wants to help the world evolve, regardless of their beliefs or how they think we should accomplish a worldwide revolution. As long as they can respect me and anyone else they work with, I don’t see any reason to reject them. The key is how we treat each other, and if your beliefs don’t hurt anyone and they propel you to strive for change, you’re alright in my book.

Society will eventually realize that our differences can bring us together, but only if we show it to them in a way that nobody can deny. Along with honoring the natural human rights our governments deny us, love, peace, respect and tolerance are the most important things we can fight for because they’ll unite a divided and broken world so we can fight the real enemy that threatens our freedom.

We’ll realize when we’re together that we’ve acted like children for centuries, and it’s tragic that full-grown adults have been incapable of honoring each other’s differences throughout nearly all of our recorded history. We can finally change this, and it starts with the willingness to no longer reject people who think differently.

No matter what we believe or how ‘conscious’ we think we are, we haven’t learned a thing if we can’t show everyone of every faith, culture, skin color, sexual preference and political stance the love and respect we all deserve.

One thought on “Unity: The Conscious Community’s Next Step”