I don’t like to use the word ‘God’ when I write about our creator. I don’t have an issue with the word itself, but it reminds me of hardcore religious fanatics with hatred in their hearts, who judge people because of an imbalanced sense of self-righteousness and an apparent need to call out ‘heathens’ for their ‘sin’.

It isn’t the fault of the word itself, and it has more to do with these people’s close-minded hatred.

Unfortunately, many of them have been driven to it by their religion. I won’t target modern religion specifically in this piece, because it’s entirely possible to be a Christian, Catholic, etc. and still be a good person. I know people who needed religion to get off of drugs and find their life’s purpose, and they certainly aren’t rude, hateful or judgmental.

Instead of beliefs, I’d like to focus on people and how we make religious excuses for our inexcusable hatred. I’d also like to focus a little on the word ‘God’.

As a spiritual writer who wants to reach everyone, regardless of their beliefs or their outlook on life, I try to avoid this word because for a lot of people, it instantly throws up alarm bells and signals that they should distance themselves.

It can admittedly attract a lot of religious and spiritual people, and there are plenty of open-minded spiritual seekers who’ll talk with you about the environment, the chakras, extraterrestrials and even psychedelics and still use the word ‘God’. They don’t see anything wrong with it, and on one level, I don’t either, but there are others who do and it’s my self-appointed job to reach them too.

Because of this, I usually use the words ‘Jah’ or ‘Source’, which are more comfortable for me. Plenty of people will recognize ‘Jah’ as the Rastafarian word for God, and ‘Source’ is a more general label that, in my opinion, supports the idea that our creator isn’t a bearded man who sits in the clouds and judges sinners.

It supports the idea that our creator is what it’s supposed to be – the Source of all existence, who could never be simplified as a man or woman with supernatural powers. I know that plenty of people, including me, use the terms ‘Divine Father’ and ‘Divine Mother’ when talking about our creator, but these have more to do with divine love (personified by the Mother) and divine stillness (personified by the Father).

The terms ‘Mother’ and ‘Father’ are used to label divine love and stillness and make them easier for people to interpret, and they aren’t intended to describe a literal man and woman.

I’m writing all of this because I wonder how many religious people who claim to be close with God are actually connected with our creator (or themselves) on a real spiritual level. How many Christians or Catholics who’ve been ‘enlightened’ by God meditate daily and actually strengthen their spiritual connection?

I’m sure there are some out there who do, but I can tell you one thing: The people who are hateful in the name of their religion definitely don’t. If they meditated every day, they wouldn’t have such an inflamed sense of self-righteousness and they wouldn’t think they’re entitled to making other people’s lives worse – especially because they don’t agree with their lifestyle.

I can guarantee that the religious woman in Kentucky, who’s repeatedly denied two gay couples their marriage licenses and has been summoned to court by a judge over it, doesn’t meditate or do anything to strengthen her connection with her creator. If she did, she would understand what Jesus tried to teach so long ago: hatred and intolerance are not the way. Unconditional love and respect for our fellow man is the way, and we can never know true harmony with God until we understand this.

There are plenty of other examples. Religious people who protest outside of abortion clinics and make young women feel horrible about themselves certainly aren’t connected with God, and they’d be ashamed of themselves if they were.

“What have I done”, they might think. “How could I make another person feel that way about themselves? What kind of hatred was raging deep in my heart to say such ugly things to someone who was at such a difficult place in their life? This is certainly not what my all-loving God would want me to do…”

I don’t even need to mention the Westboro Baptist Church, because they aren’t legit. They’re trying to be offensive to bait a response so they can sue the people who respond. They’re hoping for angry and offended people to run up and fight them, because then, they can make money by filing lawsuits.

This is different from your run-of-the-mill religious fanatics who really believe in what they’re doing, and while these people are offensive, they aren’t trying to offend people or make people fight them so they can make money. If you encounter the Westboro Baptist Church, you’d be best to do what Dave Grohl and the Foo Fighters recently did when the WBC protested one of their shows. 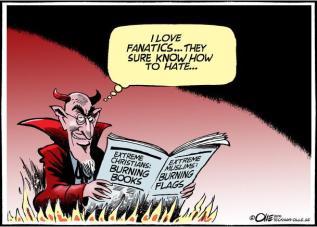 People do some awful things in the name of religion, but they wouldn’t do any of it if they were genuinely connected with the divine. They’d understand that hatred, judgment and intolerance are the ways of the devil (or depending on how you think, the ‘archons’), and they’d realize that they let the devil fool them into living lives of hatred, intolerance and perpetual suffering.

They’ve been tricked into making others suffer, but their own suffering will last longer and will hopefully wake them up at some point.

A true connection with God inspires love for all people, regardless of their beliefs, ethnicity, cultural background, or sexual preference. When we’re connected with our creator on a deep, spiritual, heart-centered level, the last thing we’ll want to do is condemn someone for their choices or their lifestyle.

We’ll understand that we’ve been given this gift of life to experience it exactly how we want, and then, we’ll give others the freedom to live their lives in peace, knowing that they’re infinitely loved regardless of what they do or who they are.

Our creator patiently waits for us to finish our earthly drama and start searching for the light, and until we do, we’re given every experience we desire with unconditional love and understanding. To know this is to be one with God from right here on earth, and it astounds me that so many people who live their lives for God and spirituality don’t understand this. How could they have missed it?

The best remedy I can suggest for this widespread spiritual sickness is for each of us to continue preaching our ‘gospel’ of peace, love, harmony, compassion, acceptance and respect. We also need to give our words meaning by practicing what we preach, and this means we’ll have to accept other people’s views and lifestyles, even if they contradict ours.

For example: I think that love, along with meditation and service to mankind, is the best path back into a higher state of consciousness. I might come across someone who thinks differently, or doesn’t think there’s any reality at all to the idea of higher dimensions. It’d be my job to treat them the same way I’d treat someone who agrees with me, and I could only hope they’d do the same for me.

We’re supposed to have different views and different perspectives, and the ones who’ve ruined it are the ones who tell everyone else we’re wrong for not thinking the way they do. These are the ones who are truly lacking in love and spirituality, and it doesn’t matter how much allegiance they pledge to their conditioned idea of God – they still have hatred in their hearts.

We can change this by helping people see that spirituality is supposed to unite us, not divide us, and the best way to do it is to lead by example. When we see someone being hateful in the name of ‘God’, let’s remember that they’re more distant from God than someone who lives a nonreligious life but doesn’t judge others.

Our ‘gospel’ is one of love and unity, so let’s spread the wealth to everyone who’s been spiritually sick and learn to accept when people don’t agree with us. Let’s stop forcing our views on others or vehemently rejecting them because they live differently, and as one people who are united in the flesh and the spirit, let’s embrace our oneness and change our corrupt ways.

Then, we can work together to create the world of our dreams – a world where nobody’s persecuted or left behind.

One thought on “Persecution in the Name of God”