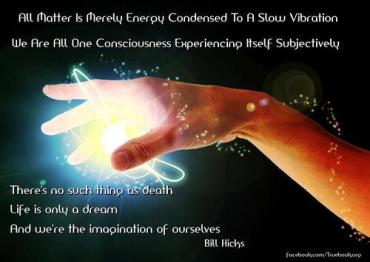 Ramana Maharishi also points out that it isn’t the physical body we’re afraid to lose – it’s the conscious awareness that exists within and around it.

“If you trace this fear to the object, the loss of which gives rise to it, you will find that that object is not the body, but the mind which functions in it and through which the environment and the attractive world is known as sights, sounds, smells, etc.

“Many a man would be too glad to be rid of his diseased body and all the problems and inconveniences it creates for him if continued awareness were vouchsafed for him. It is the awareness, the consciousness, and not the body, he fears to lose.

“Men love existence because it is eternal awareness, which is their own Self. Why not then hold on to the pure awareness right now, while in the body and be free from all fear?” (1)

We aren’t our physical bodies – we’re the inherent awareness that lives within them. We aren’t the things we see or hear, the thoughts we think or the emotions that rage within, though in a sense, we are the mind that thinks them and the consciousness that feels them.

We’re the silent, contemplative, deeper awareness that most people have yet to understand or access. The journey will get easier when we can realize this, and liberation comes with the realization that we don’t have to be attached to the body or the thoughts and emotions that come with it.

The flesh is a vehicle for the expression of our consciousness in a lower dimension, and the best way to find enlightenment is to invest all of our attachment in our true Self and our true home, which is the emptiness of our higher consciousness.

Maharishi displays the eternal nature of the spirit in a musing about his own impending death.

Franklin Merrell-Wolff points out that most people spend their whole lives attached to the material plane. They might crave enlightenment at the end of life, but by then, it’s too late to achieve in their withering body.

“The personal life is centered upon the world-field; though it is a doomed life in any case since, inevitably, Death reaps all here. Still, the personality never quite believes this and strives in its feebleness to will its continuance in the outer world, until in ripe old age it craves rest, even though it be at the price of extinction.

“But when this hour of tiredness has come, it is already too late to achieve the Awakening in that body, for this Awakening calls for a profound, though possibly subtle, virility.” (3)

If we wait too long, we’ll have to accept that we can’t achieve enlightenment in our current body. It all depends on the extent to which we invest ourselves in our spirituality while we’re here, and for those of us who are young and have a lot of years on earth to look forward to, plenty of time is still available to devote ourselves wholly to spirit.

For all we know, we spiritual youngsters could achieve enlightenment or ascension in our physical body, but if we slack off or decide to focus more on the external than the internal, we’ll fail to take the opportunity that’s before us.

We have the potential to explore our higher consciousness from within the human body, which is something that the majority of people on earth, past and present, have been unable to do.

We even have help from various gurus and spiritual teachers, and as long as we can use our discernment and remember only to accept what intuitively resonates with us, their advice could very well help us.

We also have a plethora of spiritual writers who’ve made it their mission to write about the higher consciousness that’s making itself known to all of us, and no matter how we want to assist in humanity’s awakening, the best thing we can do is stick with it and stay diligent.

Some spiritual teachers discourage consistency, but I think it’s an important trait when it comes to spiritual work. We’ll want to work as hard as we can while we’re here if our goal is to help others, but if we also want to achieve enlightenment in our current body, we’ll want to stay diligent with our personal inner work too.

Or, we can let any diligence and consistency fade into the background and do whatever we feel like doing, and in all things, we have to do what works best for us. Even when it comes to spiritual teachers, we have to find the teachers who help us and keep our distance from teachers whose advice doesn’t resonate.

“Death is a mystery that refers to both the end of physical life as well as the psychological death of a separate self, which is the hallmark of true spiritual transformation.” (4)

I’d imagine physical death is one of the most helpful yet jarring ways to bring an end to our sense of separation from our creator, and provided we were already somewhat aware in life, our greater awareness will flow when we’re no longer incarnate in a realm that blocks that awareness.

Of course, the physical realm, with all its distraction and uncertainty, doesn’t have to block our reception of our higher consciousness or awareness, but enlightenment can be hard to find in this lower vibration.

Departing the physical can allow us to explore the higher (or lower) states of consciousness we transition into when our earthly sojourn is over, and this can give rise to a renewed understanding of who we really are and why we’re doing all of this, which is to remember ourselves as our own creator.

As these passages have affirmed, we have no reason to fear death or anything that comes with living in this illusion we call reality. With diligent inner work, we can rediscover our Christ consciousness and the fact that all of our pain and fear stem from a false perception of ourselves as separate from the bigger picture.

We’ve never been separate from the universe – both inner and outer – or the supreme emptiness that created it, and our evolutionary process is taken to the next level when we start to understand this.

We can evolve our consciousness from right here on earth, as opposed to having to leave, but it requires the willingness to truly live our lives for love, spirit, and our infinite creator.

It might require a complete overhaul of the way we’ve lived our lives up until now, but any personal changes we have to make will be worth it when we’re once again mired in the bliss that comes with the disciplined exploration of our eternal emptiness.

2 thoughts on “Transcending the Fear of Death – Part 2/2”