Written by Wes Annac, The Culture of Awareness

Contrary to popular belief, the pursuit of enlightenment doesn’t have to lead us to give up activity. Finding a degree of enlightenment can actually inspire us to become more active than ever and use our knowledge to uplift as many people who can open up to what we’re saying as possible.

Even finding a small degree of enlightenment can make us want to pursue our developing spiritual connection and stay active in the name of uplifting ourselves and everyone else who’s becoming spiritually aware, and activity is an important part of spiritually evolving.

It’d be unfortunate to become useless in the name of enlightenment, and as we’re learning, we can stay active and retain our calm, patient center. Centered activity is a lot more potent and effective than mind-driven activity that we use to avoid silence, and no matter how convincing our excuse is, we’ll hold ourselves back if we avoid the silence of the sacred self.

The best thing we can do is find a healthy middle ground between working hard and staying in the still, silent flow, and that’s why I enjoy writing. It allows us to be active while still being silent and letting a higher aspect of our consciousness work through us, and I think this is what so many spiritual teachers refer to when they encourage us to be still yet active.

Activity is an important part of spiritual evolution, and as long as we don’t use it to avoid our inner silence, it can be one of the most potent ways we raise our consciousness. I benefit as much from writing these articles as you all do from reading them, for example, and I’d feel like something was missing if I didn’t write them.

I’d feel like I was going without the activity I need to spiritually thrive, and other creative people can probably say the same. A musician couldn’t spiritually thrive without music, and most creative and spiritual people use their creativity as an avenue to explore their greater perception. 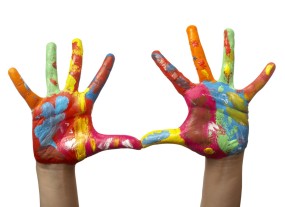 Sri Krishna encourages us to act with self-control.

“Activity is better than inertia. Act, but with self-control. If you are lazy, you cannot even sustain your own body.” (1)

We don’t gain freedom by abstaining from action altogether, he tells us.

“Freedom from activity is never achieved by abstaining from action. Nobody can become perfect by merely ceasing to act. In fact, nobody can ever rest from activity even for a moment. All are helplessly forced to act, by the gunas.” (2)

Refraining from work can cause us to ‘create confusion in the minds of the ignorant’ (not to mention that it could cause us to become ignorant ourselves.)

“The illumined soul must not create confusion in the minds of the ignorant by refraining from work. The ignorant, in their delusion, identify Atman with the gunas. They become tied to the senses and the action of the senses.” (3)

The ‘ignorant’ will find their path in their own time, but meanwhile, our work helps them along their quest to understand their reality in a greater way. If we work hard (while remembering to take time to be still) and present as much spiritually inspired work as we can, we’ll make the path easier for others who are just starting to open up.

They benefit from our diligent work, even if they don’t read, see or hear it, because our effort will always raise the collective vibration. When we work hard in the name of spirit, we uplift the collective consciousness and make it easier for others to become aware when they’re ready.

Because of this, we’ll want to stay active and keep flowing so we can help everyone become aware and use their awareness progressively. I think progressive awareness is the best kind, because it allows us to produce work that uplifts others who, without our work, might’ve had a hard time raising their vibration or becoming spiritually aware.

Everyone’s subconsciously aware of spirit, even the people who seem the least aware at the surface. Our work helps bring that subconscious awareness up to the surface and inspire the ‘ignorant’, as Sri Krishna described them, to explore their consciousness and maybe even take up their own work.

Sri Krishna also tells us that the performance and renunciation of action bring freedom.

This might sound like a contradiction, but as Ra tells us, ‘in unity, all paradoxes are resolved’. This quote actually makes sense to me, because again, we can be active and mentally silent at the same time. I’m relatively quiet in mind and heart as I write this, and that’s how the expressions you read here flow through so easily.

As long as we’re mentally silent as we work, the spirit will flow and we’ll use our work to awaken, uplift and inspire others, strengthening our conscious revolution in the process.

The best way to do our work is with a fire in our belly and detachment from the results, Sri Krishna tells us. Our work won’t be very pure or significant without these qualities.

“He who does the task

“For fruit of the action,

“But he who follows

“His vow to the letter

“At the ritual offering,

“For avoidance of labour,

Some people use the pursuit of enlightenment as an excuse not to work hard, but as we’ve learned here, hard work is actually an important part of our spiritual evolution. We’ll want to embrace stillness and fun as much as we embrace hard work, and all of these qualities put together will give us the best, most free-flowing enlightenment journey.

It also helps to remember that our work isn’t as much about the fruits of our labor as it is enjoying the journey. We’re meant to enjoy every meditation; every attempted third eye or Kundalini activation; every meditation, individual or collective, that we use to raise our vibration and change the world.

We have to enjoy the things we do to bring our planet into the light, and they won’t mean much if we don’t. If we stay dedicated and remember to have fun with our work or, as some spiritual teachers have suggested, combine our work with meditation, we’ll get the most out of the enlightenment process and we’ll be glad we worked and played so hard.

In our final quote, Sri Krishna tells us that nobody can completely give up action.

“No human being can give up action altogether, but he who gives up the fruits of action is said to be non-attached.” (7)

Non-attachment is one of the biggest goals on the enlightenment path, and this is why so many teachers have mentioned the importance of being detached from our work.

Giving up the ‘fruits of our action’ is the best way to stay detached and have fun with our work, and even if nobody reads the things we put out, we’ll know we had fun doing them and that’s all that really matters.

No matter how hard we work, we won’t achieve a thing if we don’t remember to enjoy it and incorporate silence into it.

When it comes to writing, music or anything else, that sacred inner silence is an important part of it. Without it, our work would be as stale and hollow as the cultural garbage the mainstream media constantly flaunts, and it’s safe to say that none of us want our work to be at that level.

So let’s stay aware and do what we can to bring the world into the light. Something tells me we’re achieving more than we realize, but regardless of what we achieve, enjoying ourselves is the most important part of our work and our spiritual evolution in general.

As long as our activity is fun and spiritually nourishing, nothing else matters.

I’m a twenty-one year old writer, blogger, musician and channel for the creative expression of the Universe, and I created The Culture of Awareness daily news site.

4 thoughts on “Activity is Part of Enlightenment”