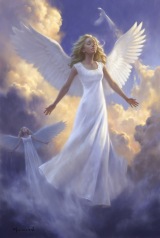 Written by Wes Annac, The Culture of Awareness

One of the ideas that’s tossed around the conscious community is that there are other planes of existence beyond the physical earth. With dedication, effort and patience, we can raise our vibration and become higher-vibrational beings who look upon the earth (and other lower realms) with the desire to help its people evolve.

Some people think there’s more to life than our human level of existence, and beyond this realm exists other, more advanced ones that boast the ‘angels’ we’ve heard so much about from religion. I’m open to the idea that angels exist, and I think they’re higher-vibrational beings who do what they can to help us understand our spiritual nature and let the divine into our lives.

In order to raise our vibration enough to find enlightenment, we’ll have to open our minds and consider concepts we might not have taken seriously a short time ago. The conscious community’s nothing if not open-minded, but every now and then, I notice an element of close-mindedness with some seekers.

Some are unwilling to open up to concepts like angels that are associated with contemporary religion, but others have considered that higher-vibrational beings like angels, archangels, etc. exist and could want to assist us.

We rebel against contemporary religion in this day and age because of its obvious falsities and the things its leaders do to control people, but this doesn’t mean some religions don’t contain glimmers of truth.

I think there’s a difference between genuine and distorted spirituality, and one of the things we can learn about if we open our minds a little is the existence of ‘angels’ in higher states of consciousness.

We can also grasp the idea that we become angels by raising our vibration and spiritually evolving, but becoming angels isn’t actually our goal. The goal of the seeker who wants enlightenment is to reach the highest, purest state of consciousness that can be attained, which exists beyond any higher realm we’ll reach anytime soon.

Complete, unhindered union with Source takes place on a level far beyond the angelic realms or any other higher realms, and to merge with Source requires us to transcend every lower and higher realm and reach this indescribable state of consciousness where we’re one with our creator and our individuality has ceased.

The purpose of this article isn’t to focus as much on Source as the idea that we’re incarnate angels who, with focus, effort and a little patience, can rediscover our angelic heritage and raise our vibration to the point that we reassume the angelic form we left behind when we came to earth.

Depending on how heavily you want to humor certain ‘new agey’ concepts, you could say we all came here from higher realms wherein our form was more angelic than human. Again, I think ‘angel’ is just a label to describe a higher-vibrational being who’s focused on helping earth.

Those of us who are here to raise the collective vibration could very well be angels who wanted to uplift humanity, and when our job is done, we’ll return to our angelic form and continue up the ladder of spiritual evolution until we reach the pure, unified state of consciousness where we give up any limited labels, judgments or perceptions.

I think some of us left the angelic realms to come to earth and help its people find the light and eventually evolve, and we’ll learn a little about these realms here.

Zarathustra tells us that the seeker who’s realized God ‘remains in all glory’ with the angels.

“For ever and everlasting [the God-realized one] eternally remains in all glory with the Spiritual Angels.” (1)

An anonymous teacher, who inspired me to remind us not to focus solely on becoming angels, encourages us not to fix limits for our growth.

“Fix no limits for your growth. It has no limits, except those you create by your own willing and thinking: therefore think only of growing, and never of being full grown.” (2)

If our goal is to become the angels we might’ve been before, we’ll miss out on the chance to raise our vibration further once we ascend into the angelic realms. I’m sure those realms are plenty blissful and heavenly, but once we’re there, we’ll realize that we still have more growing and learning to do.

The angelic realms are a great evolutionary destination to focus on for the time being, but we’ll see when we’re there that growth and evolution are infinite. We’ll continue to evolve until we’re back with our creator, and even then, we might decide to come back and do it all over again.

Some spiritual teachers have told us that the evolutionary process basically starts over again after we’ve been back with Source for a while. Despite the sheer bliss that’ll likely permeate us when we’re back with Source, we’ll still want to go through the process of rediscovering ourselves as God again.

Some people might think it’s egotistical of so many spiritual teachers to claim they’re God incarnate, but most of us still don’t understand that we’re all God incarnate. We’re all incarnate embodiments of our creator, and as most of us know, we create our reality in every realm we incarnate in.

Thus, it doesn’t seem so wacky to consider that some seekers have discovered themselves as God in a more potent form than others and are willing to proclaim their godliness.

I think we should all proclaim our godliness to a degree, and even though most of us haven’t enacted the discipline so many God-realized spiritual teachers have, we’re still worthy of calling ourselves God because no matter what form we embody, we’re God at our core.

We are and have always been our own creator, but when we raise our vibration to a new level of consciousness, we’ll realize that we’ve also been angels all along. To be angelic is simply to be God in a lesser form, and the same can be said for being human.

In a famous quote I’ve shared before, Rumi tells us about the evolutionary stages he remembers experiencing.

“I died as mineral and became a plant. I died as plant and rose to animal. I died as animal and I was man. …Yet once more I shall die as man, to soar With angels blest; but even from angelhood must pass on: all except God doth perish.

“When I have sacrificed my angel soul, I shall become what no mind e’er conceived. Oh, let me not exist! For Non-existence Proclaims in organ tones, ‘To Him we shall return.’” (3)

I don’t think ‘non-existence’ means we actually won’t exist – it just means we won’t embody the identity-based form we recognize here on earth, which is the same form we’ll recognize in higher realms as it grows and evolves.

Only when we’re ready to be back with our creator will we transcend this identity-based form once and for all, and until we do, it’ll continue to evolve and take on greater, more angelic versions of itself.

Franklin Merrell-Woolf tells us that there’s ‘no conceivable end to evolution’.

“Beyond [the sage’s attainment], whatever it may be, there lie further mysteries awaiting his resolution. In other words, We find no conceivable end to evolution.” (4)

No matter what spiritual source we hear from, they always tell us that there’s no real end to the evolutionary process. Even when we’re in a blissful state of consciousness that’s free of the worries, pains and stresses we’re used to on earth, there will still exist more advanced planes to eventually access.

We don’t need to be in any hurry to evolve from the earth, however hellish some people think it is, because we aren’t doing all this for the conclusion. We’re doing it so we can enjoy the journey back into our godly essence, and it’ll be quite a while before we reach the end of a pretty much endless cycle of consistent spiritual evolution.

There are plenty more quotes we could examine on this subject, and I might revive this discussion another time because a lot more could be said about it. Hopefully, you’ve all gotten the point this article’s meant to convey, which is that there are higher realms beyond our human perception that we’ll reach as we understand ourselves as God in purer measures.

In my opinion, the more we realize ourselves as God, the more we’ll raise our vibration and evolve our current forms – physical, mental, emotional and spiritual. It takes a lot of discipline to truly embody godly qualities on earth, and it’ll require us not to fall into the fray most of us easily fall into time after time.

We’ll eventually get there if we’re dedicated enough, and along the way, we might discover that we have an angelic lineage, which we’ll reclaim as we grow through the various dimensions that stand between us and full union with our creator.

We can embody the form of angels (or of Source to the best of our ability) right here on earth if we’re willing to discipline ourselves, and we might be glad we did. The bliss we’ll enjoy will be worth any effort we made to attain it, and we’ll eventually be open, receptive spiritual seekers who understand our godliness and are willing to use it to help others.

I’m a twenty-one year old writer, musician and blogger, and I created The Culture of Awareness daily news site.

4 thoughts on “Angels and Spiritual Evolution”