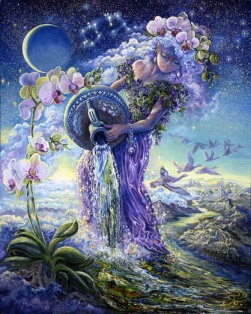 The following was written by Wes Annac for the “planetary healing” section of The Aquarius Paradigm Weekly Newsletter, which is being offered for $11.11 a month. Income from the newsletter helps my family and I get by, and the option to subscribe will be given below.

Imagine a future of every citizen working together in peace and harmony to fix the problems our planet faces and enter a new paradigm based in the will of the people. Imagine peace and abundance being expressed and felt by everybody, and the resulting drive to create and be the change we want to see being stronger than it’s ever been.

Imagine anger, stress and frustration fading away and an undeniable sense of love descending onto all of us. Imagine the general pain and difficulty of our daily existence being replaced with unprecedented joy and passion to be creative and love one another.

These are just some of the qualities of the astrological age “Aquarius”. Depending on who you listen to, we’ve either entered this age already or we’re experiencing a shift from our current astrological age, Pisces, into it.

The increased social action and change we’re seeing across the world could perhaps be noted as signs of this continual shift, and a lot of people believe that the end result will be the widespread cultivation of harmony and unity.

Before we get into the spiritual significance of the Age of Aquarius, let’s take a look at it from a purely astrological standpoint. Wikipedia tells us about our shift from the Age of Pisces to Aquarius.

“The Age of Aquarius is an astrological term denoting either the current or upcoming astrological age, depending on the method of calculation. Astrologers maintain that an astrological age is a product of the earth’s slow precessional rotation and lasts for 2,150 years, on average.”

“There are various methods of calculating the length of an astrological age. In sun-sign astrology, the first sign is Aries, followed by Taurus, Gemini, Cancer, Leo, Virgo, Libra, Scorpio, Sagittarius, Capricorn, Aquarius, and Pisces, whereupon the cycle returns to Aries and through the zodiacal signs again. Astrological ages, however, proceed in the opposite direction (‘retrograde’ in astronomy). Therefore, the Age of Aquarius follows the Age of Pisces.” (1)

So instead of returning to Aries after the completion of Pisces, we’re going “retrograde” and experiencing the Age of Aquarius, which is believed to herald exposure of collective and individual darkness along with widespread transformation.

We’re then told about the disagreement among many astrologers as to when the Age of Aquarius “officially” begins.

“According to different astrologers’ calculations, approximated dates for entering the Age of Aquarius range from 1447 AD (Terry MacKinnell) to 3597 (John Addey).

Astrologers do not agree on when the Aquarian age will start (not even if it has already started). Nicholas Campion in The Book of World Horoscopes lists various references from mainly astrological sources for the start of the Age of Aquarius. Based on the research by Nicholas Campion most published material on the subject state that the Age of Aquarius arrived in the 20th century (29 claims), with the 24th century in second place with twelve claimants.” (1)

I mentioned above that some people believe we’ve already entered this new age, and here we see that others think we won’t officially enter it for hundreds of years. Personally, I think that we can decide when this era “officially” begins with our action and intent in every moment.

The qualities of the Age of Aquarius can be understood and acted upon by each of us, and as we’ll see later in this report, I’m not the only one who believes that our expression of those qualities is the biggest factor bringing about this age. With this belief, time becomes an outdated way of measuring just when it’ll begin.

It begins with all of us!

Wikipedia tells us about more of the qualities that have come to be associated with the Age of Aquarius.

“Astrologers believe that an astrological age affects mankind, possibly by influencing the rise and fall of [civilizations] or cultural tendencies.

Many astrologers consider the appearance of many of these Aquarian developments over the last few centuries indicative of the proximity of the Aquarian age.” (1)

We’re then told about the perspective of one Vera Reid on the Aquarian Age, which is similar to what I expressed above.

The last sentence of this quote, “the destiny of humankind in the Age of Aquarius is the revelation of truth and the expansion of consciousness” really resonates with me. Is this not exactly what all of us conscious seekers aim for?

We’re expanding our consciousness as we learn the truth of our existence, and I have a feeling that waves of people are going to open up to this truth and expand their understanding in incredible and potent ways. As I’ve said before, this is only the beginning of our collective rise in consciousness.

Before we proceed further, I should mention that different groups seem to have their own understanding about the new age we’re entering. Religion talks about “heaven” or “Zion” and some groups that could be considered “new age” possess somewhat astrological beliefs related to Aquarius, but a common factor is the belief that we’re entering or shifting into heaven.

For a lot of people, this is the end of an old age and way of being, and the beginning of something so much better that everybody can thrive in. The belief that we’re shifting into a heavenly state of consciousness fuels a lot of awakening people to help raise the awareness of the planet, and I think we’ll find that the result of our work is well worth the effort.

Now, we’re going to hear about the Age of Aquarius from 2012-Spiritual-Growth-Prophecies.com. First, we’re told about the exposure and integration of everything based in the lower vibrations in preparation for the most potent effects of our shift.

“The Age of Aquarius is causing great turmoil, to make room for the new values of love, brotherhood, unity and integrity. Everything with Piscean values is being exposed and taken down. This includes governments, corporations, individuals, and even personal relationships. Many call this a disaster, as the world appears to be falling apart, but is it?

The Aquarian Age points to the direction of our own evolution in consciousness. We are each being asked to make a choice. We can cling to the old outdated values or adopt the new evolving ones. Our happiness and peace depends on our choice.” (2)

The snippet above further reinforces the idea that a new age starts within each of us. The choices we make are essential to our building of a new paradigm, and the more we express the qualities of peace, harmony and acceptance, the more the rest of the world will be able to open up to them.

We’re then told about famous psychic Edgar Cayce’s prediction about a “gradual change” starting in a potent way in the 1990s.

“Prophesiers such as Edgar Cayce called for a ‘gradual change’ starting in 1998 between the Piscean Age and the Age of Aquarius. He didn’t call for a cataclysmic end. He also hinted that it’s up to us through our actions and choices as to how much pain this change will bring.” (2)

Some people believe that this gradual change can entail a series of potent shifts, and personally, I’ve experienced a lot of inner shifts that have led me to a refined and expanded place in my growth and evolution. Perhaps it all comes back to the fact that our rate of growth depends on the manner in which we embrace our personal and collective evolution.

Continued in part 2 next week.

(2)- 2012 Spiritual Growth Prophecies: “The Age of Aquarius Traits are Building as the Next Great Age Begins” at:

2 thoughts on “Planetary Healing: The Dawning of the Age of Aquarius”