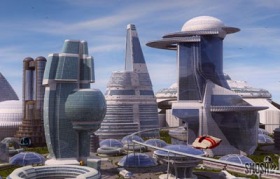 The following was channeled for the ongoing “astral travels” section of The Aquarius Paradigm Weekly Newsletter.

This week, rather than perform an exercise I thought it appropriate to learn a little bit about our fifth-dimensional Earth and the work that was done to get our world from where it is now to where it will be.

I decided to connect with the fifth-dimensional aspect of my higher self (or “future self) who, speaking for the collective, has given us some insight into our new Earth. It’s hoped that the resulting discussion is helpful, and is a sufficient replacement for an exercise this week.

The aspect of my form existing on the third and fourth-dimensional ascending Earth has requested I come through on this day and give information regarding the fifth-dimensional Earth you’re building and growing toward.

We should say, and I am indeed speaking for a collective of fifth-dimensional Earthly souls, that your “new Earth” is the culmination of all of the work you’ve done and will be doing.

Your new Earth is the result of so very much hard and dedicated work and service to humanity, and having experienced the building of this Earth ourselves, we can say that in the initial stages there could be some difficulty in building it.

We don’t say this to dip anyone’s vibration or make your new Earth seem unattainable, as every trial and tribulation you experience will be necessary for your ultimate growth and will, if you let them, see you skyrocket toward a brimming future full of fully-conscious individuals who work together to keep your planet and collective sustained.

The initial hurdles humanity could experience are in the way of coming together and seeing beyond your perceived differences to build your new Earth. While this could be difficult in its initial stages, and we speak from experience having underwent the difficulty ourselves, we ask you not to worry; for your potential to come together will far outlast any differences that may initially keep you apart.

Instated separation has been prevalent on your world, and has been purposely crafted by souls who don’t want humanity to realize your potential to come together. After doing just that (coming together), the hardest and purest of work to begin building your new Earth will be done.

The aspects of building your new Earth involving cleansing pollution from your skies, healing the separation and war-based wounds prevalent in the collective and ceasing the massive pollution of Gaia as it stands in your current moment, will be the first for humanity to address.

The energies prevalent in the collective consciousness will forever determine the events that manifest on your world stage, and this is why we encourage addressing your collective concerns and scars and working to heal them as you grow into greater perceptions of yourselves and your reality.

As for our Earth – it’s a harmonious and restored planet whose citizens experience pure peace and prosperity, with no soul excluded.

Nature has been restored to this planet in the ways it was once prevalent, and we’ve been able to reestablish means of travel that go far beyond what your collective currently experiences.

The advanced technology that was disclosed and made available for all helped us to build a prosperous society, and the work put in to restore our planet physically helped us to evolve into the purer states of consciousness you’re now working your ways back toward.

We were able to Create our society based on the ideals of every person, after the cabals as they’ve been termed were exposed.

It was very stunning and surprising indeed when the initial exposures regarding the cabals were brought forth, but despite the initial anger many experienced, the rebellion that could’ve turned violent didn’t because of the calming and healing presence of various Lightworkers all around our world and humanity was able to build a positive outcome.

This is what you’ll be doing as well, and while we couldn’t yet express in detail much of what we’ve built as we don’t seek to spoil the surprise for you, we can say that the aforementioned advanced technologies assisted greatly in our re-engineering of cities into crystal cities and our ability to keep Gaia’s natural resources in Her ground where they belong.

We experience a completely prosperous society in every way, and we have the added boost of the blissfully-pure fifth-dimensional energies and perceptions to enjoy as well.

Whereas we used to fight, bicker and complain over various different matters and had allowed a small collective of elites to run our world for us, we’ve since come together and established the grandest of unity and harmony upon our planet.

In doing so, we assisted our ascension energies in being reflected on Gaia’s surface, and have brought our collective vibration into the necessary resonation for us to enter the fifth dimension.

We experienced trials as we ventured through the realms of the fourth dimension, just as you will, but we ultimately overcame and found ourselves smack in the middle of the building of a Galactic society, which is now an intergalactic destination point for many organizations and Federations bent on helping the Universe to ascend.

So many (Galactic) races and organizations exist and have existed around our and your planet for so very long, that you could perhaps understand when we say that billions of them exist with us on our Earth now.

We reconnected with them after their existence was fully disclosed and understood on our planet, and they helped us to establish peace and understand that we’re all One consciousness comprised of various unique and individual Godsparks.

Realizing the Oneness of us all helped awaken us to the fact that we were feeding into distorted ways of Living and being by warring amongst each other and feeding into separation in any way, and now, we experience pure joy as we celebrate the unique existence of each of us as facets of the Creator.

Coming to understand that we’re conscious co-creators of the experiences we have in a fluid reality we were taught to believe was dense, really helped awaken us to the reality of so many things we would’ve previously scoffed at or laughed away.

The realms of full consciousness have a timetable laid out for your ascension, just as they did ours, and are helping your collective to respond to the energies you’re being given in every moment.

You can assist in this process tremendously, by visualizing and affirming the negative or dense energy in your collective consciousness be cleansed. Many of the awakening Lightworkers in our early years of ascending and building our Galactic society did just that, and their efforts were quite crucial to helping the rest of our collective awaken.

On our Earth, we maintain constant connection with the Inner-Earth or “Agartha” as it’s been termed. We’ve largely rebuilt the colonies of Atlantis and Lemuria, and Agartha stands now in the Inner-Earth as its own separate colony. Both Agartha and Lemuria are filled to the brim with individuals!

Ah yes, we’ve made many efforts to restore and rebuild many ancient civilizations though of course, with our history being as extensive as it is we could never rebuild or restore all of them, lest we wished to use space outside of our planet.

Our cities no longer pollute our planet as they once did, and indeed, they couldn’t if they wanted to in the fifth dimension. Rather, our cities are powered by clean and pure crystal and free energy, and this energy powers each bit of technology we use.

We do indeed use technology in the fifth dimension, and standard cars as you know them have been largely replaced with ships and what could be called “hovercars”.

The “hovercars” are available to souls who are more comfortable flying or traveling closer to the ground, though we must note that fear and anxiety have faded away completely in the realms of consciousness we’re delighted to exist in. Even still, there are some who, for their own reasons unrelated to fear or anxiety, choose at times to travel closer to the ground and technology is available for those souls with Love.

The needs and wants of every person are met in this brimming Galactic society, and we detail some aspects of our society in an effort to uplift you dear souls into Creating it yourselves, and of course, to give you a glimpse of the future you’re heading into.

We can hardly describe the fifth-dimensional aspects of our existence as a Galactic Earth, and can only relay the societal changes we’ve made which are directly perceivable in your minds and hearts. We can discuss the positive changes we’ve made, but we cannot yet detail the glorious energies and perceptions we exist in because, for the most part, your temples aren’t yet expanded enough to absorb such discussions.

They will be in due time, and as we make our final impressions for this communication and thank each of you for absorbing our message, we admit that we’ve only been able to give you a small glimpse into our society.

Perhaps in future communications if our scribe chooses to bring us through, we can expand upon this discussion and offer you so very much more in regards to the changes we’ve made.

For now, we leave in peace with our Love, and we express that we’ll continue to be with each of you to help you build your own model Galactic society.

Thank you to my fifth-dimensional Future Self for the discussion you’ve given.

This concludes this week’s astral travels.