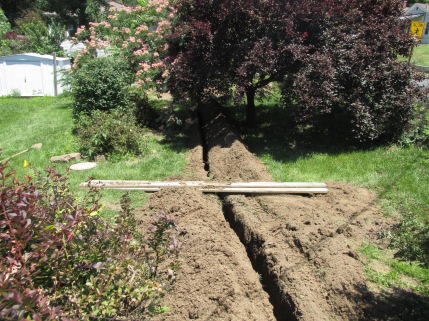 Our beautiful back yard currently has a three-foot-deep trench dug into it, from the back deck all the way out to the alley, where the waterline comes up.

We’ve had an amazing repairman at our house nearly every day, working on the electric and water and bringing the house up to the standards of the city it’s in, as the city will inspect it when the repairs are done to make sure it’s up to the standards they’ve set, which have to be met before we can move in.

Much of the electricity in the house now works, and we’ve been able to plug things in and benefit from having fans and what not, after a long day of working hard.

Though I haven’t worked on the house nearly as much as our repairman, I’ve certainly done my fair share of hard work and have found myself drained most days; having posted and given my own work, as well as physically exhausted myself working at our house.

I’m young and can handle the hard work, so I’m not necessarily complaining. A sense of satisfaction is bred from working hard and getting a lot of stuff done, but I have to say that it feels like Life has been flying by and all of my days are merged. Perhaps that’s a model for how the immediate future’s going to feel.

Back to the trench – the waterline running under our house turned out to be cracked, and so a whole new waterline is being put in by our repair man, thus the trench. We rented a trench-digger for half a day yesterday (which is pretty expensive, as it’s a sophisticated piece of machinery) and dug the trench, and we’re hoping it doesn’t rain before tomorrow, when the new line is being put in.

Repairs and material for the repairs have proven costly, and while I have no real worry or concern over my financial fate, I see that a bit of financial support is still required if we’re to finish the repairs and be able to move into to our home.

If any of you would like to donate, you can do so via the “Contribute: Donations” button on the right-hand side of The Aquarius Paradigm blog site, or you can send donations to my PayPal email address: wesremal@yahoo.com.

Again, I possess no real concerns of “not making it” because if there’s one thing I’ve learned this year, it’s that I’m constantly looked-after and protected. Even still, it doesn’t hurt to seek assistance.

Regrettably, I’ve been trimming-up many of the overgrown plants in our yard. They’re only overgrown by human standards, but it’s one of many things required by the city before we can move in.

Overall, things are running very smoothly and we hope to be in our new home, which you readers have greatly contributed to us being able to get, as soon as possible. I plan to continue to post and give writings, messages, Newsletters, etc. as normal, while giving as much physical labor to our dear home as is needed.

I started my role in this movement as a young man with a perspective that was un-hammered by the “adulthood” aspects of the Earthly experience, and now I’m coming to experience and learn about every facet of illusory “adulthood” that’s been instated on this world and taught as normal. Specifically, I see that money is the absolute driving force behind everything.

Does it not seem a bit distorted to keep an illusory currency system in place that keeps the few on top and the rest on the bottom? My entire view of money and abundance is beginning to change, as I see it simply as a tool that dictates what humans are able to do and how we’re able to Live on this world, which leans-on how much money we have.

I also see it as the driving force behind everything in the “adult” Life.

The cabals will use their conservative news outlets to make the common man look like a sponge on the back of the government. However, the truth is that the government and the various institutions that have been set up to take money from us in exchange for commodities and goods that every person should have, free of charge (and no, I’m not a socialist for saying that – stop attaching a fearful label to everything!); they’re actually sponges on the backs of the people.

Any bit of financial abundance people on the “bottom” in the United States are blessed with is usurped by the local, state and federal governments; by the IRS; by the electric and water companies; by so many institutional and governmental usurpers.

I think we need to tell the billionaires who’ve cleverly designed this entire ploy to stop their sponging off of the common man and earn their personal abundance in true and fair ways, rather than gathering up all of our important resources themselves so they can sell them back to us.

Money is an idea we’ve overinflated on this world, and the old paradigm-manner that money is used won’t be a factor in our sovereign future. For me, being able to see money for what it really is helps me to see this world in a whole new light.

I’ve digressed in this personal update, and will wrap this up with appreciation for the support you’ve all expressed for my family and I. It means more than words could ever express!

I’ll post a picture of the part of the trench that was dug by unscrewing some boards on the back deck, getting under there and digging. Needless to say, it was a lot of work! 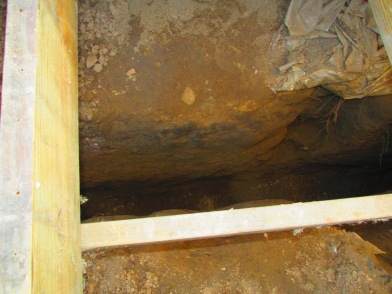